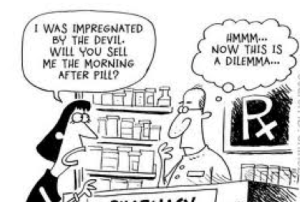 This is one of those, “Should I put it on the Internet?” kind of posts. Today’s youth are totally fine with the intimate details of their lives being thrust upon any populace interested in reading. I’m not really about that, but there comes a time when being honest, being true, rises to a higher level. I think this is one of those times.

I am going to address a woman’s right “to choose.” I recently found myself in this precarious situation, thinking I would never again have to face an unwanted pregnancy in my lifetime. It’s easy to assume, but the collateral damage is considerable and worthy of discussion.

It’s easy to judge, but unless you’ve had a pregnancy that needed to be terminated (whether due to health or circumstance), you really cannot begin to comprehend this “choice.” For 25 years, I sat on the sidelines, pretty fucking clueless. For many of those years, I was in a monogamous relationship where even an unwanted pregnancy would have resulted in a child loved by both parents. (For all my ex’s faults, he truly loves his kids!)

The first time I had to consider an unwanted pregnancy (i.e. 25 years ago), I was involved with a profoundly mentally ill person, which, considering the events of Friday, I’m lucky he only killed himself at the end. At that time, an abortion was a difficult and traumatic procedure. Which isn’t to say I’m sorry I went through it. I was in no position to raise a child by myself, and since the father took the most selfish of acts to end his life, I don’t think I would have had the resources to raise a mentally healthy kid in that environment.

The “procedure” involved heavy medication and indifferent treatment to my nether regions. In that era, some women suffered from trauma and guilt after having this kind of abortion. Anti-abortion advocates paraded the periphery of clinics that offered this procedure (when they weren’t bombing them) with obscene posters making confused women even more confused. This meant we didn’t have a “choice”. We basically tried to procure an option to get out of a very dark place.

Fast forward a generation, and medicine has caught up with need. Turns out, all you need today (assuming a 4-week termination) is a pill. Quick. Simple. You do it at home. In short: it’s a really bad period. This isn’t to diminish what is going on, but a termination is a termination and the easier/earlier the better. When you cannot have a child—whether for emotional, health, financial or any other reason—the thought that you could move on with no trauma is a God-send.

And I do not use that word lightly. I don’t think God is in abortion (a soul, after all, is a soul). There are lots of bad people, but you cannot paint a broad stroke when it comes to abortion. Consinder the men who harm and leave/abandon. Only the woman is forced to deal with the consequences. That medicine has made it easier for a woman to choose an outcome that does not harm anyone further is an amazing advancement in science. One for which I am grateful and won’t take for granted.

I wish that I weren’t forced to choose at this late stage of life, but the reality is out there. I write today because too many women have remained silent. (I’m not sure I know any adult woman who has not had or contemplated an abortion, but most don’t want to talk about it.) I want to end that silence. I’ve dealt with too many bad relationships, and I am profoundly relieved that—in the event of an unwanted pregnancy—I have the choice to select a birth control option that allows me to move on from these relationships with minimal additional damage to me and the family I chose and love profoundly.

And I don’t want my right to choose (or that of my daughter or any other young woman) to be proscribed just because we have an easier, less-traumatic choice available to us today. It’s not a matter of thoughtlessness. It’s a matter of correcting a wrong, learning from mistakes, making reparations, and trying to do better.