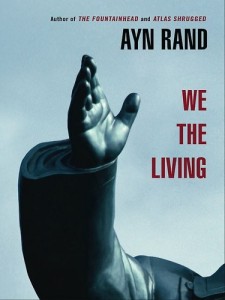 If you’ve been weathering the 30 days of NaNoWriMo, then you know how important literature is to humanity. That’s not hyperbole. To quote the late, great Albus Dumbledore (channeling J.K. Rowling), “Words are, in my not-so-humble opinion, our most inexhaustible source of magic. Capable of both inflicting injury, and remedying it.”

Great writers create worlds that inflict injury and remedy it. Okay, SPOILER ALERT. Usually it gets remedied. Often times, however, the pain of life never is neatly resolved. The despicable humans in their terrible natures are not redeemable. Everybody dies. Think: Anything ever written by Cormac McCarthy. Or today’s Book that Shaped My Life (and alluded to earlier this month), Ayn Rand’s We the Living.

Aside from being a brilliant—albeit devastatingly tragic—story that continues (or—more accurately—started, since this was her first published novel) themes of conflicted love and independent will. The novel is both a send up of love triangles and an indictment of the Communist Revolution that created the Soviet Union and send Ms. Rand fleeing her homeland. We the Living also shows how cruel and arbitrary abrupt shifts to a country’s infrastructure and established culture can be.

I read this novel towards the end of 1991. While I was living in the Soviet Union. For those who might need a history lesson, Gorbachev was put under house arrest in late August of that year, while Boris Yeltsin was standing on a tank pontificating in Red Square. When I arrived in the USSR, the ruble was trading at 1:1 on the dollar; on the black market, I could get 8 rubles to the dollar. By the time I left three days before the Union was officially dissolved, the official rate was 35 rubles to the dollar; the black market couldn’t compete. Gas was in short supply. Food, which had already been rationed, was disappearing. Pensioners who had done everything “right” under the Communist system were now looking at lives of destitution as formerly secure retirements and housing simply evaporated into the new capitalist and mafia-run world order.

As I read We the Living, I truly felt that I was living this novel. Everyone was so desperate to get out (I received four marriage proposals while I was there), just as the lead characters in the book. Of course, as an American, my passport was my exit visa. However, the images of that great nation falling apart were deja vu to a story covering a similar era 70 years earlier.