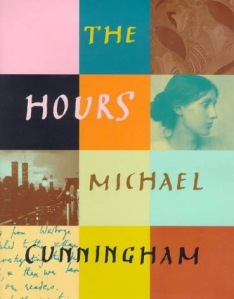 I have to admit that oftentimes “art” escapes me. If I have to try too hard to appreciate something that has been deemed a work of genius, I start to question my own, and then I wonder if I’m not as intelligent as I believe myself to be or if the art in question is a big joke being played on the audience. I do have evidence to support the latter theory. Lolita, for example, was a big “fuck you” to the readership: Nabokov wrote it not because he was a pedophile (oft suspected in literary criticism circles) but because he was angry that the West didn’t like his previous work; he vowed to write about the most depraved topic he could because the West would devour it (and, incidentally, we did). But I digress…

When it comes to award winning literature, sometimes I just cannot understand why the book is so lauded. Not so with today’s entry, The Hours, by Michael Cunningham, which won a Pulitzer Prize in 1999 (along with other top literary gold). This slight work is possibly the most economically written book of all time. (The word count is roughly 54,000 words, just a fraction above the standard cut off of 50K that delineates novel/novella categorization.) Every word matters. Mr. Cunningham doesn’t veer from his narrative, despite the fact that one of the characters, Virginia Woolf, is among the most wordy writers in literature. His prose is brilliance, pure and simple. And it is a simple book—but rather like a pointillist portrait—is less than the sum of its parts.

What I most love in Mr. Cunningham’s book, however, is the three parallel stories. This work influenced my novel considerably (The Truth, available on Kindle now with a print version coming soon). I loved how one insignificant detail in one narrative was prominent in a second narrative only to be an afterthought in the third narrative. And when the three tales come together, I literally was breathless, as though I had fallen from a tree and had the wind knocked from me.

This is one piece of award-winning art that makes utter sense to me. It’s a book to read and read again.