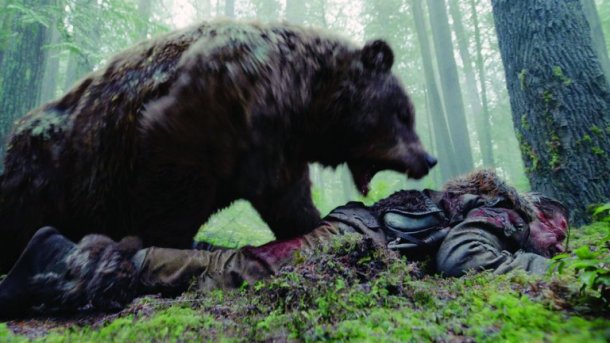 The Best Actor award ought to go to the guy on the left!

UPDATE: While I’m pleasantly surprised that Spotlight won for best picture, it’s a Pyrrhic victory since Iñárritu won Best Director. Also happy to have been wrong about Rylance’s win.

I’m gonna go out on a limb and state what isn’t at all risky: The Revenant will win Best Picture at tonight’s 88th annual Academy Awards. I have to admit I’ve gotten into it quite a bit with friends and colleagues over this year’s nominees, but none has rankled me more than the best picture nod for this atrocious film.

Let me start by saying, SPOILERS ABOUND in this post. I have seen all the films this year and with the exception of Mad Max: Fury Road, I can’t say that any of the nominees are outstanding. They are as follows:

So why pick on The Revenant when none of these films is a stand-out to beat it? Because The Revenant is just so damn stupid that I want to pluck out my own eyeballs after watching it! Don’t get me wrong, I am fine with all different kinds of movies, but you know there’s a problem when a movie about a guy growing potatoes in his own shit on a distant planet is way more realistic than one “inspired by actual events.” There are so many things wrong with the verisimilitude in The Revenant that I could probably stroke out before I could enumerate them all, so I have limited myself to 10 things that make The Revenant the most preposterous and, therefore, least deserving film to win the Oscar in recent memory (and, yes, I’m even including Crash on this list):

The only slight silver lining? The cinematography on The Revenant is outstanding and deserving of the Oscar Emmanuel Lubezki will receive.

And there’s a wee bit of hope on the directing front: I think that George Miller will win Best Director for his superior film. I’m holding out that the Academy won’t reward Alejandro González Iñárritu with back-to-back Oscars (he won last year for Birdman) despite his film’s momentum towards its inevitable gold statuette. I definitely won’t be tuning in to watch beyond Chris Rock’s monologue (I’m sure it will be worth a few #OscarsSoWhite moments) and *probably Sly Stallone’s acceptance speech (per Forbes, the Best Supporting Actor Oscar will be the first award given out tonight). After that, I’ll head to bed with a teddy bear and the dream of better movies being recognized at next year’s ceremony.