Way back at the start of the year, I made a crazy 52-things-to-do-in-2015 list (some of which I’ve actually done/stuck to). First on the list was to lose weight. After a great January and February where I managed to lose almost 11 pounds, I started to slack off in March. By the end of May, I had put back on almost all the weight, which made me feel even worse than I did five months ago.

Here’s the thing: There’s a reason why the weight-loss industry exists; it’s almost impossible to lose weight and keep it off. I have never been a yo-yo dieter, but I have struggled with weight issues most of my adult life. This is in large part due to fortunate (?? – debatable) genetics that have allowed me to carry an extra 20 pounds that don’t “show.” Even at my current girth, I still have a waist. I get complacent and fall into bad habits and the same 10-15 pounds creeps back up until I decide to “diet” and lose that weight. It’s a cycle common to many people because permanent weight loss is the Holy Grail of “health.” Your weight may not indicate your overall health, but certainly as we age, the more overweight we are the harder it is for a body to do all the things we need it to do.

But besides all that… I just hate how I look. Now, this is nothing to do with attractiveness; to be honest, I’ve never had more attention from men my whole life. My low self-esteem aside, I have never been someone who focused on being attractive to others. The men I like tend to like me and the size of my ass doesn’t seem to be of primary concern in my relationships (or maybe it is, ha ha). The point is, when you cannot stand to look at yourself in the mirror, this is a bad thing. I know I need to change, but permanent change is very difficult.

I’ve had four periods of rather dramatic weight gain and have managed to lose weight exactly three times in my life (expressed in % of weight as opposed to pounds):

Please note the ** on #3 above. The truth is, I didn’t succeed in losing weight solely through diet and exercise as I was one of the very first people in America to catch Swine Flu. I was so sick I thought I was going to die. I had been trying to lose weight for a little over a month, and I had dropped about (drum roll and no surprises) 10 pounds over that time. While ill, I baked at 105 degrees for five days and lost close to 20 pounds in a week. Once I was well, I swore to myself I wouldn’t put that weight back on, and for about a month I really monitored what I was eating every day and kept to a very low-calorie diet. That weight stayed off and I lost an additional 15 pounds or so. As noted above, I kept that weight off for several years before the “creep” began again… but I cannot honestly claim that I would have succeeded in losing that weight had I not gotten sick.

At the beginning of 2015, I set out this year to lose weight in a healthy way, but I’m failing. And flailing. And I feel like crap. I just don’t do well on “slow and steady wins the race.” There are a whole host of reasons for this, but I think if I am to succeed, I need some kind of “Biggest Loser” intervention. Short of catching another deadly disease, I’ve decided to take an extreme measure and attempt to lose 30 pounds in 30 days. I suspect I won’t accomplish this, but I also know that constant on-going deprivation leaves me feeling, well, deprived. I also know that June is a pretty good month for getting out in NYC: The weather is not so gross as to preclude movement in the city that always reeks in July and August. And while I have doubts that I’ll succeed, I think this is maybe the only way I can possibly get back on track (and, in fact, the goal was to lose approximately 30 pounds by the end of June from my January 1st timeline).

It’s important I note the following:

My plan for the next 30 days, which I will track in a spreadsheet:

I actually just go for a walk with no plan about losing weight. I used to walk a ton, but that was back when I had a walking buddy. It is so much harder to walk when you are alone. However, as often happens, my head clears and I begin to think about this 30-day challenge; the more I walk the more this makes sense to me. Sticking to the short game is bound to be easier than the long one. Plus, I know I’ll shed 10 pounds very quickly (it’s the same 10 pounds I’ve put on over the last couple of weeks). I devise a plan (see above) and go forth. I also have my lovely, skinny daughter (I joke she’s half the woman I am… LITERALLY!), take some horribly unflattering photos: 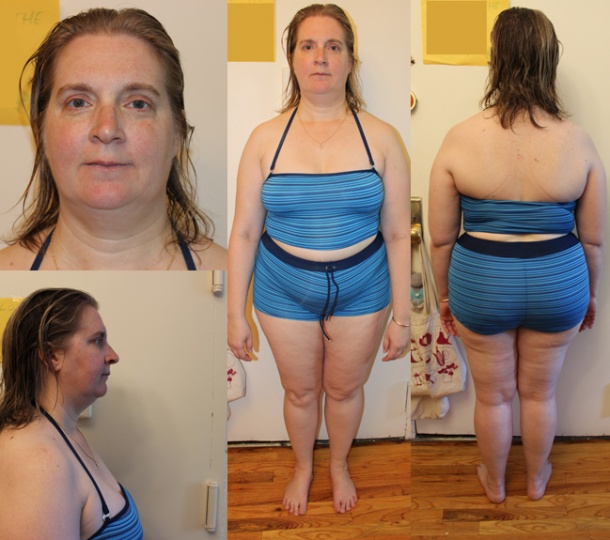 My plan is to take updated photos once/week because the scale is only one measurement. I will also use a tape measure to get more information on my body change. I know that at some point I will plateau, and I don’t want the lack of movement on the scale to be my only form of measurement.

Read here for the first 10 days