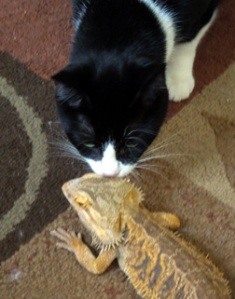 I have a confession to make: I never wanted a daughter. When I found out 21 (eek! TWENTY-ONE) years ago that I was giving birth to a girl, I wasn’t disappointed. I was petrified. My worst fears were coming to fruition. And those fears were all about me. I never wanted my daughter to grow up to be her mother.

So, when I found out 12 years ago that I was going to have a boy, I thought, well, “This should be easy.”

Turns out that gender has nothing to do with personality. A girl can be resilient and strong; a boy can be sensitive and compassionate. And I’m pretty sure that genetics like to fuck with us.

Here’s the thing: My daughter is the quintessential poster child for nature v. nurture. She is 100 percent her dad in the former and 100 percent me in the latter. And it’s a truly exquisite balance. She’s not perfect (none of us are), but she certainly has every component working to its fullest capacity. I won’t brag, fearing Godsmack, but she just is this amazingly cool human being who—I truly believe—will have a fascinating and fulfilling life. Good for her! She’s earned it. As have I.

See… I parented her as I needed to be parented and, frankly, wasn’t. This isn’t about bashing my folks, who did the best they could with the tools they had. My daughter was born at the right time in the right place with the right mom. That’s it. When people say to her, “You’re so lucky…” we both cringe. But, in a sense, she was lucky: to be born before technology was in our DNA, to have all the advantages of being upper middle class (when we still were), having four limbs and a genius-level IQ. That’s luck.

But everything else has been this delicate balance between the two of us. And I’ve loved every minute of raising her; even when we were awful to each other. She’s the amazing woman she is today because of our relationship. And, yes, I take full credit! 😉

But my son… Oh, my beautiful boy. He’s God’s little joke to me.

I’ve always thought that if I found Aladdin’s lamp and came upon the Genie, I would relinquish any rights to the three wishes. I’ve always feared “the catch.” I mean, you wish for $10 million, only to find you’ve robbed a bank. Your own private island, only to be in a Castaway-type scenario where your plane crashes and you have to extract your own tooth.

Only not. His nature v. nurture is this odd moodiness from his mother combined with a penchant for deception from his father. A suspicion that everyone is out to get him (dad) along with a self-sacrificing disposition (mom) that leads to feelings of alienation and persecution.

Today, for example, he came home in tears because he had “volunteered” at school to do some activities that no one else in his class was willing to do. But he didn’t want to do them either, and he was unhappy that he was now “stuck.”

Then, we discovered his bearded dragon had died, maybe because of age or the fact that keeping his terrarium at a constant temperature has been a problem this winter. Or maybe because of neglect: my son just had this disconnect between his responsibilities as a pet owner and the pet itself (I was mostly caring for Norbert, but it was supposedly my son’s pet).

I allowed him to adopt Norbert because we have this estrogen-filled household: a sister, a mother, two female cats. My son swore up and down that he would watch after his pet, but more and more it fell on me. And now I feel bad. Because I feel like I failed both my son and the stupid reptile in our care. I feel like I failed as a mom, because I was trying to make things better for my boy, and instead he found it a burden rather than a reward.

So now I’m just trying to figure out how to parent a boy in a city that isn’t appropriate for young males. I used to joke that two things do not belong in NYC: large dogs and boys. But it is an extraordinarily difficult place to raise a male, especially if you are not rich. I recently enrolled him in parkour (courtesy of my father, who paid the tuition); his dad is teaching him to box; baseball is back in season (thank goodness for the practically free baseball league in the city!).

But as my son faces puberty, I am more and more aware of my deficiencies as a parent. And although I know that we are what we are both because and in spite of our parents, I so long to be more of the former and less of the latter.

RIP Norbert. You were a good pet.