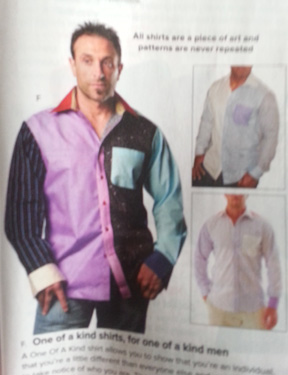 Speaking of reality checks… This is an actual shirt you can buy from the Travel Mall magazine. I think it runs upwards of $100. I shit you not.

Wow. I cannot believe it is almost Thanksgiving and my blogging has gone from stellar to sub-par in the course of a year! I remember last November bemoaning the handful of days I missed on my 30-day challenge. Now, however, it’s reminiscent of my weight gain. (I look at photos of me from two years ago and cannot believe how quickly I put weight on: if only weight were like money… so hard to gain and so easy to lose!)

I am seeing my friends do their 30 days of gratitude posts on Facebook, and all I can think of is negative gratitude: I’m grateful I don’t live in the Philippines. I’m happy not to be among the 10 percent of my city’s resident homeless, many of whom are probably riding the MTA all day today in an effort not to freeze to death. I’m grateful I’m not freezing to death.

So much for my efforts to engage in more positive thinking!

While I can pinpoint the cause of my current malaise, the issues go much deeper. I have been struggling since summer to settle in and focus. I went so far as to drop several hundred dollars on a meditation seminar in the hopes that I could rein in my wandering mind. Unfortunately, as soon as I started meditating, I also started putting on weight. I gained ten pounds in the first three weeks. Apparently, the last thing I needed in my life was an even slower metabolism. Of course, the weight gain has made it harder for me to move around, meaning I don’t even want to exercise. And there was that whole issue of 300+ hours of work I did in September (ironically, it was my most distraction-free month in over a year). Which meant I was sleeping even less than normal. Which made concentrating in October a bear. And then I had a major upheaval thrust upon me at the end of October, pulling me into a deep funk right as Daylight Savings ended and dusk is now at 4:30. In. The. Afternoon. When I see the sun heading for the west at 2:30, my day just goes from bad to worse.

Even choosing which task to complete first becomes problematic. In the 40 minutes or so that I’ve been trying to type this out, my son came asking for breakfast, the cat knocked a bunch of stuff off my desk, I went to look at a couple articles on Internet distraction (an early study from 2002 by Davis, et al, in CyberPsychology & Behavior draws parallels between “Internet addiction” and “workaholism”… mostly, I liked their phrase “cyber slacking”), and ended up thinking of a good pitch for Complex Magazine, which I then had to research to see if they’d already covered the topic (they had, a year ago).

Unfortunately, the same technology that I need for my bread and butter is causing me a lot of problems. When I’m hyper-focused, I can be online and use technology efficiently. However, as this New York Times article points out, eschewing the Internet altogether is a virtual (pun intended) impossibility:

The problem is similar to an eating disorder, says Dr. Kimberly Young, a professor at St. Bonaventure University in New York who has led research on the addictive nature of online technology. Technology, like food, is an essential part of daily life, and those suffering from disordered online behavior cannot give it up entirely and instead have to learn moderation and controlled use.

Moderation and controlled use. Sure. No problem. Ha ha ha ha ha.

Seriously, though, figuring out how to get my mind to focus on just one thing for more than three minutes is really hard. I’m distracted even when I’m distracting myself (I can wander off while watching television, for fuck’s sake!).

I have been in nearly daily contact with a very good friend who lives in Pittsburgh and has been working a 12-step program for the past few years in an effort to deal with an ending marriage. She suggested that I start working on the steps myself. It had been many years since I was in a program, and I hadn’t even thought of the 12 Steps until she got me thinking maybe she is right.

For those who don’t know them, here they are:

After reading this, I remembered how Christian the organization is. Although there are many alternatives to the 12 Steps, they all have “the man upstairs” in there. Even “higher power” is more a euphemism for other religions than it is for something other than God, a notion I really cannot from my heart embrace. After literally a lifetime of trying to grapple with God in many of its forms, I just don’t buy it. I’ll still cross myself from time to time and I appreciate certain aspects of Orthodox Christianity (or Buddhism, Hinduism, etc.), but I am pretty much resolved to accept my position that I’ve held (and fought) pretty much my whole life that there is no God.
I read those first three steps and I was, like, “Yeah, I’m fucked.” One more distraction with nothing to show for it.
But then I had an “ahah” moment and googled “12 steps for atheists.” Among the search results was this site. As I read through the article, hoping to find alternatives to the 12 Steps, I finally found the key to unlocking a program that can work for me:

You can accept reality as your Higher Power.

The brilliance of choosing REALITY as my higher power really hits home. I think that is a big part of why I’m all over the place mentally right now. I’m not god. I can’t control anything. All I can do is let go and let Reality do its thing.
So, I accept that my life IS out of control and I’ll let Reality settle in and help me make sense of it. And while I’m getting ahead of myself, I think this post has me well on the way to Step 5. (For AA’s 12 Steps for Atheists, click here.)