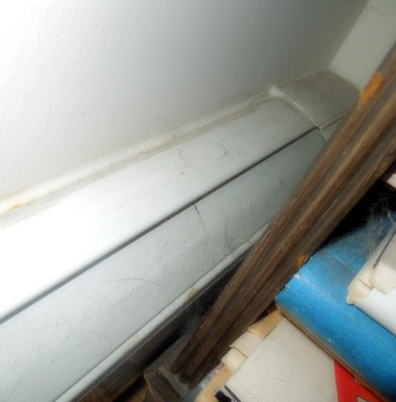 The corner of my bedroom. Undusted for… awhile. Meh and ick.

I have suffered from major depression almost my entire life. I’ve been in counseling as recently as 12 years ago, and when I was younger I tried a few different medications to get me through some rough patches. But for the most part, I live with my depression. We have been stalwart companions the better part of 45 years.

My depression has typically been pretty predictable: Worse in the winter (the ironically appropriately acronymed SAD), worse at my birthday and Christmas (both falling in the aforementioned time), and particularly chronic when I’m awaiting news that invariably turns out to be negative. Any major disappointment has me avoiding bridges in and out of Manhattan (no joke).

This spring has been particularly heinous. After trying to determine why I feel so awful and rummaging through the usual suspects of lack of exercise and too much beer combined with stress and financial struggles, I landed on THE CHANGE as a major culprit. While this may let me off the hook with regards to personal responsibility (the only thing worse than teenage hormones is mid-40s hormones… trust me, kiddies, you ain’t got nuthin on yo’Mammas!), it doesn’t change the fact that being in the throes of a prolonged episode is hard at best and debilitating at worst.

For reasons I don’t really want to go into at this particular moment, I’m feeling better. It’s as though that veil of muck and gunk has been pulled back and something fresh-smelling has wafted my way.

Which isn’t emanating from my filthy apartment, obviously.

I hate to be a cliche, but I honestly have been oblivious to the dirt collecting in my living space. Especially around the corners. I’ve still been doing the dishes (often), the laundry (sporadically… the kids usually prompt me to run a load… they’re far too old to be roaming naked around the apartment), running the vacuum (about every 10 days, I guess), and cleaning the toilet (maybe every other week???); but the real dust, dirt and crud that has left a film on everything is reminiscent of my mental state.

Instead of feeling as though I’m trudging through thigh-high sludge, I now am flitting about, constantly distracted by some stain or smudge that must. Be. Eradicated. NOW! I’ve got that near manic compulsion to clean everywhere: I’ve pulled out the fridge, I’m scrubbing the walls, no spot goes untreated. But the effort is endless (the irony being I only have 800 sq. ft. of living space). I’m staring up at the light fixtures, noticing their are insect carcasses, wondering how I can get up there to clean them out (9′ ceilings; no ladder).

I’m especially peeved at my cats (I have been keeping up on the litter, I should note; my kitties have a distinctly disgusting way of showing their disapprobation of a dirty litter box… i.e. they go outside the box). My cats’ hair is everywhere. I want to shave them, it’s so bad. Now, I know that it isn’t truly their fault. I don’t remember the last time they were brushed, but I’m pretty sure it was before their home (my apartment) was pushing temperatures close to triple digits. They’re hot; they shed. I get it, but it’s annoying as all get-up to clean a spot only to return moments later with their clumps of fur casually dropped behind. I’ve got cat hair on my books, cat hair in the bathroom sink… hell, I’ve got cat hair in my refrigerator (not in the food, but just along the door’s edge… gross regardless)!

Which I suppose has taught me one very important lesson. If I’m going to fight bouts of depression into old age, I’d better limit my felines to two. Because I never want to be “the crazy cat lady.” Plus, I prefer my omelet without unnecessary additives.