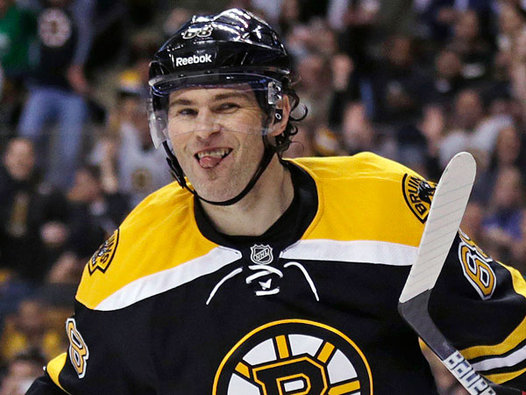 Is anyone paying attention to this guy? Photo courtesy of http://www.bostonsbettah.com.

I feel I must break from Blogs that Inspire to discuss sports that don’t. I suppose it’s a wee bit early to eulogize them, but has there ever in the history of sports been so colossal a meltdown as the 2013 Pittsburgh Penguins? They aren’t just struggling; in fact, for the first two games of the Eastern Conference finals, they have looked like a pick-up league from Pittsburgh. Actually, I used to watch a number of pick-up games when I lived in Pittsburgh; those lawyers, doctors, bankers and other professionals showed a lot more tenacity getting up at 4 a.m. to play in a scrimmage than these Pens have shown against the Boston Bruins.

While no one is talking about him, I blame Jaromir Jagr. Seriously.

First off, full disclosure. I covered the Penguins part-time as part of my full-time job at a print newspaper in the late 1990s. Thus, I’ve met Mr. Jagr… along with Mr. Barrasso, Mr. Kovalev and a bunch of Czechs that made the Pens of that era feel more Eastern European than North American (interestingly, another Boston player, Andrew Ferrence, was also on the roster). I was there when Mario Lemieux was negotiating to buy the team and would sit in the regular section of the old Igloo (an architectural wonder that was destroyed in the name of civic progress). It was hardly the hey-day of the Pens, and Jagr struggled both on the ice and off.

It’s easy to overlook the Jagr-factor in this Penguins debacle. The Pens have played like amateurs, and Jagr’s stats (3 assists, no goals, +3) don’t amount to much. However, if you look at shots on goal, Jagr has been a regular contributor, putting as many shots on net as all but the best Boston players (9 shots in 3 games, versus 12 for “star” Brad Marchand… Patrice Bergeron’s game winner in the second overtime of game 3 was only his fifth shot).

Plus there’s his sheer size. Jagr is ginormous. He’s as difficult to tackle as teammate Zdeno Charo (at 6’9″, the tallest player in NHL history). Every time he’s on the ice, he’s a threat to the Penguins.

And here’s the kicker, he knows it. It’s like the Emperor has no clothes and Jagr is the Court Jester. Or—to show more reverence to this future hall-of-famer—the bastard step-child who turns out to understand more about the King than his legitimate son.

I felt the exact same way about him last year with Philadelphia, a first-round series that was much closer and against a much more tenacious opponent for the Pens. There are always certain match-ups that seem to follow a prescribed route. Jagr seems to have the Pens number each and every time he hits the ice. And while I have no proof, Jagr has become one of the elder statesmen of the game, and I suspect he’s “coaching” his teammates against the Pens.

I can hear the locker room chatter: “Sidney Crosby? He’s no Lemieux. I played with Lemieux. These guys aren’t unbeatable. I can beat them. You can beat them.” And so on.

Because I love Jaromir Jagr, I actually have a sympathetic passion for him to win another Stanley Cup. He was the only player ever to win back-to-back Cups in his first two years in the NHL. But after he wins (against Chicago, I’m guessing), I want him to retire. Don’t go for the full circle (i.e. close out with two Cups just as he began). Retire. Go back to Czech. Marry that girlfriend you’ve been dragging around for years. Have kids. Live your life.

One thought on “Less than Inspiring: The 2013 Pittsburgh Penguins”