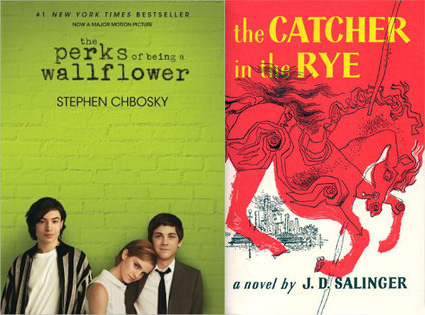 One of the greatest literary arguments of all time is how many plots exist and whether original stories can be told that break free of these plots. Famously, Joseph Campbell co-opted the term “monomyth” to define the “hero’s journey,” which many literature aficionados believe encompass all the stories in all the world.

Whether or not you subscribe to the notion that there are a finite number of plot devices, you probably will agree that the selective amnesic, angst-ridden teen as antihero is a recurring theme in literature. Two of the more outstanding depictions of this type of protagonist come in the slight yet profound novels The Catcher in the Rye and The Perks of Being a Wallflower.

Both books follow the misguided adventures of a teen boy who has been traumatized by an obscure event in his past. Both boys (Holden Caulfield in Catcher and Charlie—no last name—in Perks) hail from small world Pennsylvania where each boy views sex (and sexuality), partying and privilege from the outside looking in. Both books address issues of molestation and alienation and a general apathy to engaging life fully. Holden and Charlie are observers, watching from the periphery (sometimes literaly, as when Holden observes his sister on the Carousel, for example, or as Charlie watches his classmates at a dance).

Stephen Chbosky owes much to J.D. Salinger, the latter having faced many criticism and book bans for content in Catcher, not to mention blistering literary analysis as his novel became requiring reading for 50 years of high school English students. Set 40 years after Catcher, Chbosky’s book even gives a nod to Salinger’s when Charlie is given the book to read by his freshman English teacher.

So, who would make a better boyfriend? Certainly Holden is the more original character, but he’s also snarky and borderline. He reminds me more of Alex from A Clockwork Orange than the typical coming-of-age hero. He seems pretty FUBAR, and by the end of the novel, he’s barely changed. He seems resigned to the life he was fleeing and still ambivalent about his relationships. He also seems to see only the worst in people, even at the end of his “walkabout” journey.

Charlie, on the other hand, always sees the best in everyone. When he finally faces his past, he seems ready to reconnect with his friends and family (Perks is told in epistolary letters to an unknown recipient; by the end of the book, Charlie is bidding adieu). He’s damaged goods, for sure, but he never seems truly broken. With therapy and the right combination of support and luck, Charlie probably goes on to live a full and good life. He may even be able to find true love. At the very least, he’s going to be looking for it. Holden? Not so much.

If you were letting your daughter go to the prom, you’d want Charlie to be the man pinning on her corsage. Plus, the boy is totally capable of throwing a knockdown punch.

Charlie wins with a blow to Holden’s head in the 10th round.