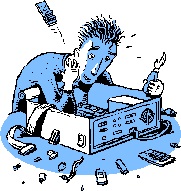 I must beg forgiveness for the last week of not being around. In fact, I did manage to get out a few blog posts for my paying gig that I may upload and predate, but they weren’t glorious. And the reason they weren’t glorious was directly related to the nasty sinus infection I got last weekend (I’ll spare my reading public the ugly details). This was followed by a sympathy gesture some 36 hours later, when my computer decided to stop working.

Personally, I’m blaming it all on my ex. He dropped by after a week skiing with his daughter-like girlfriend (at the risk of sounding catty, I’m over it although he seems to keep her on the down low; after four years, I know about her and she and my daughter are only a couple years apart, so they make fun of him whenever he has to put on his reading glasses… but I digress). Anyhow, he showed up, late on the support money, late picking up his son for visitation, wearing designer duds and looking very refreshed from his mountain retreat.

Now, to be honest, I don’t begrudge him two vacations in two months, despite the fact that my last non-working vacation was in December. Of 2011. He works hard and he does send that support money, so he needs a break now and again. My complaint is that he stood in my doorway, refreshed and aglow, wearing designer duds and salivating over my computer. This was feigned of course. My computer (GOD BLESS IT FOR WORKING… I’ll get to that…) is a POS. As in: Piece. Of. Shit. It has always been a POS. It’s a laptop, and the keyboard gave out during the warranty period. This seriously never happens. I got my computer refurbished under warranty. That’s how crappy it is.

So, my ex thinking I have something wonderful when I don’t just irked me. I pointed out to him that the keyboard is missing keys. That the computer is crap. He then pronounced that it felt cold in my apartment. He left with our son, and I thought the moment had passed.

Until the next morning. The furnace had stopped working. It was as if his proclamation of the chill in the apartment permeated the place and caused the furnace to malfunction. The damp chill didn’t take long to attack my depressed immunity (it was a long week), and suddenly I was terribly ill. Next up? My computer stopped. Just stopped. I had no idea what was wrong. I just knew that I hadn’t backed up my hard drive for three months. And my only back-up was PC-formatted and the only computer I had to work on was a Mac. In other words, I was fucked. And not in a good way.

All I could think in my sick haze was that my awful ex had infected both my furnace and my PC with his evil thoughts. Enough already!

After a bit of Advil PM-induced sleep, it dawned on me that my computer had been having connectivity issues for awhile. Best case scenario, there was a bad power cord. Two prolonged computer repair visits later (in a slightly feverish state) proved me right: I got a new power cord and I’m back online.

So expect more regular updates. And my sinuses thank you for your patience.