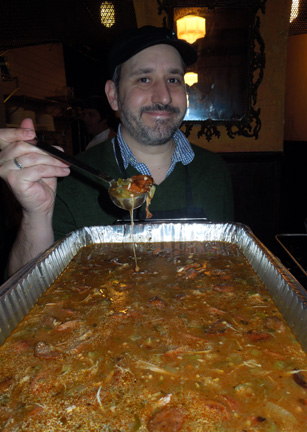 Yesterday’s second annual Gumbo Cookoff to benefit Chefs for the Marcellus brought in a vast array of gumbo from traditional to unusual, with a bit of ethnic flair thrown in for good measure. A baker’s dozen of chefs brought their best N’Orleans fare to tempt the spice buds of all in attendance.

Among the more unusual gumbo recipes was Michelle Lamorte’s Gumbo Choux, a cabbage gumbo she recreated from a 1901 Times Picayune Cookbook recipe; Mary Cleaver’s Green Gumbo with turnips and fried oysters; and Exchange Alley’s Paul Girard with Pigeon Gumbo (the pigeons were sourced from D’Artagnan… we asked!).

In the end, the awards went to:

Thanks to all in attendance, and especially this year’s judges: Will Blunt, Rozanne Gold, Cathy Erway, and Richard Stein.