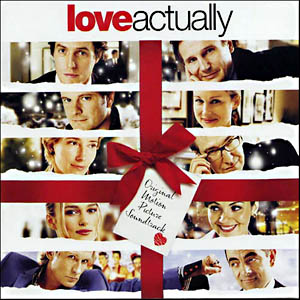 I know by now it’s almost cliche to include Love Actually in the canon of Christmas film classics, but it has become a tradition in my home to watch it on Christmas Eve. This typically means me and my daughter; in a few years, I hope it will mean me, my daughter and my son. Among the many perils of kids born nine years apart is they may not be ready for an R-rated holiday film at the same time.

Here is why I love this movie. Spoilers abound.

It’s all about the Billy Mack. Every year we watch this film, my daughter makes fun of me for proclaiming how Bill Nighy was robbed of an Oscar (or, at the very least, a nomination). Watch him play the nuance. The odd chuckle. Stroking the statue’s head before he professes his love to his manager. The shudder in the radio studio. Mr. Nighy embodied this role, and it’s a damn shame the academy didn’t recognize it. And I think his story arc is the most extraordinary and real of the bunch. Here’s a guy who basically wasted his life being wasted. He wakes up and realizes that one person stood by him—not for the 15 percent—but because he truly cares for his client and wants him to be both successful and happy.

I love how Hugh Grant’s Prime Minister goes for the “secretary.” Too often women in charge forget that men need to feel in charge. We bully and tirade and then wonder why we are alone. Hey, I’m a feminist. But we need to throw the boys a bone. Natalie is secure in who she is. She doesn’t go on an anorectic trek to win back the old boyfriend who called her “fat.” She’s content with her lot in life. Finally, the Prime Minister comes on board, accepting his own feelings, ill-timed though they may be.

While the story of the Englishman in Milwaukee seems implausible, I often think the most unrealistic storyline is the Laura Linney arc, where she gives up a chance at personal happiness for her brother. However, when you look at long-term relations, blood always is thicker than water. What’s to say Karl doesn’t abandon her if she gives birth to a child with the same mental illness as her brother? It’s heartbreaking, but no one can ensure her heart wouldn’t have been broken anyway.

The Keira Knightly-Andrew Lincoln-Chiwetel Ejiofor (yeah, I had to look up the last actor) love triangle is another heart breaker. However, in my poly-friendly mindset, I’d like to think the three of them live happily ever after (even though it seems by the end of the film Mr. Lincoln’s character is moving on).

Liam Neeson is the best step-father ever! After losing his “wife” (made all the more tragic that a few years after the film was shot he actually did lose his wife), he raises his step-son non-judgementally, encouraging the boy to take chances. Speaking of hearts, the final scene, where he calls Daniel “dad,” breaks my heart every time.

Finally, there’s the Cinderella tale, where Colin Firth goes to France to write and ends up falling in love with a woman who literally doesn’t speak his language. It’s five weeks between the day they meet and his marriage proposal. This story is pretty close to my own, having met my ex in the USSR and marrying him six weeks to the day after we met. Yeah, we didn’t last, but 18 years is pretty long by today’s standards and I have two wonderful kids from my marriage. I’m guessing that in the end, Jamie and Aurelia (which also happens to be my deceased paternal grandmother’s name) had a couple kids and split up, but that doesn’t mean the love of two strangers is any less actually love than the various types of love portrayed (and betrayed… can you get through Emma Thompson’s Joni Mitchell scene without shedding a tear, too?) throughout this film.

So love who you have. Don’t pine whom you have not. And Merry Christmas.