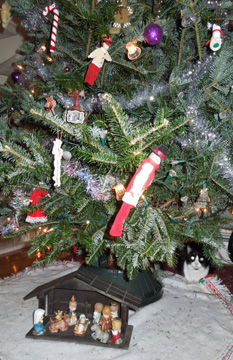 It appears all I got for Festivus was a cat!

Tonight is Festivus (for the rest of us) and by tradition (Festivus is as old as I am, so I guess it can have traditions), tonight is for the airing of grievances. Who am I to argue with having a proper bitch session two days before Christmas.

Grievance #1 – Both my kids are sick.

I cannot imagine a worse time for both kids to get sick. And at the risk of going from bitch session to being a bitch, I hope I don’t catch what they have. Especially since I have to work on Christmas Day. I also hope my parents, traveling for the holidays, don’t catch anything from them.

Grievance #2 – Hoards of tourists in Times Square that don’t move.

Whether they are standing in the crosswalk and staring up or doing chin-ups on traffic signs (yes, someone was… without his shirt, which caused all the other gawking tourists to stop and watch him), I cannot stand how tourists won’t move along. And my daughter just exposed roughly 1000 of you to her illness as I was trying to get her through the mass of humanity. I hope you catch it from her.

I have a difficult time not being judgmental, but I have worked on this over the course of my life. I am trying to embrace people who tell me things I may not want to hear, which means I need to be confronted with honesty. I think it takes an amazing amount of strength and bravery to be truthful. Sadly, lies will out and my harsh reaction to liars doesn’t reflect well on either of us.

Somewhat apropos of #3, I have a lot of trouble just letting go. Especially when I have my expectations raised. I get angry when I see injustice and stupidity, and I get angry when I have been wronged. I once confessed to my priest about being angry and he said that righteous anger is not a sin. I accept this, but it’s my post-anger behavior that is really the problem (my deadly sin probably would be wrath). When someone hurts me or someone I care about, I have a great deal of trouble not wanting to hurt them back. My best recourse is to avoid these situations. I wish I had better coping skills for enduring these situations because often I simply cannot avoid people who have been hurtful. Time heals all wounds, but it takes, well, time.

Grievance #5 – Climate change and powers that be who deny or refuse to do anything about it.

Whether its hurricanes that look like they were from central casting for Hollywood’s latest disaster flick or Governor Cuomo’s unwillingness to ban fracking, environmental changes are severely impacting this planet and, you know, us humans who reside here (not to mention all the other displaced species, over fishing, toxic animal production, etc.). I do what I can to write letters and reduce my carbon footprint, but the situation is getting worse. I don’t know what the solution is, which makes me angry. And the up-and-down weather makes my kids sick! And the people who lie about it are part of the cause, not the cure. And, I’ve little doubt, they’re all in Times Square right now, blocking traffic.

One thought on “Happy Festivus: An Airing of Grievances”