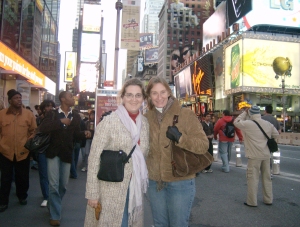 Showing my sister around Times Square.

I could easily choose to quote Frank Sinatra (yes, I know Leonard Bernstein wrote the actual lyrics, but everyone knows the song from Sinatra) when it comes to living in New York City. If you can make it there… I have now lived here for five and one-half years, and almost every day here has been a formidable challenge. I know for a fact that I will have to leave here at some point. I mean, I guess I won’t make it here. Or maybe I just don’t want to.

However, unlike the traveler in the above quote, I have done my best to create a life here. Whenever I complain about the expense, the noise, the filth and the masses of indifferent humanity that teem across this city, I am generally confronted with “move away.” To be honest, I don’t care to leave not so much because I love New York but because this is where I am. Home and the heart and all that.

In fact, if I were to win the lottery tomorrow, there is no doubt that I would buy a little brownstone in Brooklyn (Ft. Greene, maybe). I might not live here year round, but I would like to know that I have a safe haven in this crazy city. As a writer, I find a vividness to life (and death, for that matter) that might not be accessible in middle America. I also see up close why Obama won the election (without getting into politics, my little neighborhood is a very eclectic mix of working class Dominican, old school Italian and Polish Catholics, Hasidics, and upper middle class gentrification), which is that this country is a mix of very different constituencies that cannot be summed up as one type. I truly love that about NYC, and there aren’t a lot of places in the world as diverse as Brooklyn right now.

The cacophony and expense of living here is exhausting; it’s a constant level of stress, and finding true, deep and meaningful connection when you are one face among 13 million is nearly impossible. But I’m not ready to give up. One day I may be forced to leave, when I cannot rely on the kindness of family to help pay my rent. For now, I’m glad to call New York my home.