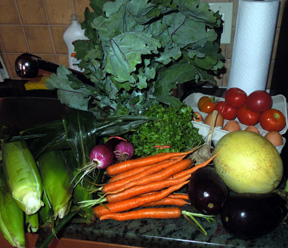 A typical weekly share from a diversified farm (even during a drought! clockwise, from left): corn, Russian kale, tomatoes, eggs, garlic, musk melon (in my veggie share!!), eggplant, carrots, cilantro, and red onions.

Among my many writing (ad)ventures is a weekly newsletter I write for an organization whose work I admire greatly (in fact, I’d love to be on staff there full time). However, in the meantime, I donate my efforts to get out cool info regarding CSAs. I recently submitted an article about the advantages of polyculture—i.e. diversified farming—and found it severely expurgated when it landed in my inbox in final form. I suppose they liked the idea of the article but not the somewhat (from my perspective, it was pretty balanced) political tone I took.

While the recent break in the weather has brought some much-needed rain to our region, much of the country remains under a severe drought. The warm dry winter has evolved into a hot dry summer, and it’s estimated that the monoculture corn and soybean farms are going to sustain severe losses due to the weather.

One of the great things about being part of a CSA is that you are allowing small farms to practice diversified farming, also referred to as polyculture. This was the way communities grew food for centuries, before technology would allow a single crop to be shipped all over the world. Polyculture offers a distinct advantage during seasons of extreme weather in that certain crops will thrive in certain environments.

Another advantage of polyculture is that farmers in our area have been able to take advantage of the early spring. Many of our farmers were harvesting full-grown fruits and vegetables back in May – well before the first distribution of most CSAs.

Whereas corn and soybeans are cash crops for the long-haul, the warm spring meant that CSA members were getting a wider variety of plants far earlier than we normally do (no six weeks of radishes this spring!).

Assuming the drought persists, you can expect to find more of the following in your share:

These are all drought-resistant crops, that require neither genetically modified seeds nor excessive irrigation (most statistics agree that corporate farms use at least twice as much water to grow a single crop than diversified farms use to grow many different crops). Obviously, having drought-tolerant plants is a great thing for the diversified farmer to have during a hot summer such as the one we have this year.

The final edited version kept the first two paragraphs and pretty much eschewed the rest. So, here’s what I really think!

Monoculture is killing this country. For starters, we have one of those amazing nations where so much of the land is arable, something that nations from Peru to Ethiopia simply do not have. We do not need to grow only one or two varieties of crops because our ecosystem allows for bounty. We aren’t a nation 10,000 feet above sea level, nor do we solely exist in a desert biome. We are a sustainable nation that would have no need to import any foods if we chose diversified farming over monoculture farms.

Second, monoculture is killing us literally: The chemicals needed to sustain monoculture farms are toxic (cancer, autism, asthma are all up since factory farming took over the nation’s midsection – coincidence???) and strip nutrition from the food supply (there’s no food in your food!). Case in point: High fructose corn syrup (HFCS) is not a food product, yet we willingly consume an average of 35 pounds of this crap every year! And even someone made stupid by eating too much HFCS probably understands that turning our food supply into fuel is an indicator that an ear of corn probably isn’t what it was when the natives introduced it to the Pilgrims 400 years ago.

Which brings me to my third and final point, monoculture is costing us billions. When corn = gas and the corn crop fails, the price of gas will inevitably go up. This affects everyone regardless of personal fuel consumption (when the price of gas goes up, inflation generally follows). With regards to the monoculture producer, farmers face blight and bankruptcy when their one and only crop fails instead of having alternative crops to fall back on in times of extreme weather (and climate change aside, there’s almost always some form of extreme weather during the course of a growing season). Paying for extra irrigation costs them too (it is estimated that monoculture farms use twice the water of polyculture farms). Not to mention the need for fertilizer and insecticides (speaking of water, the run off from those chemicals is costly to municipalities to clean up, inevitably passing along a tax to residents to do so). Plus there’s the issue of shipping in all those food products you aren’t growing within a 100-mile radius (and some would argue it should be a one-mile radius). We still need the vitamins and nutrition a diet from a diversified farm provides. If your farm cannot give you those nutrients, you’ll be paying to have them brought in from elsewhere.

Food security is national security. When our farms fail, we put ourselves at risk far greater than that of any “terrorist threat” or madman at the movies. Yet our food supply is actually within our ability to control! Anyone, and by that I mean anyone, can grow his own food. Even if it’s just a basil plant. Advocate for unused public space or abandoned private space to be converted into an urban (or suburban) farm. Build a community (yes, you can get to know your neighbors up close and personal!) around growing food. Wrap your head around the farm bill (still in negotiations) and petition your so-called representatives to act (whether for or against; I’m not going to tell you that). Understand your food system and participate fully in it.  Your life—and the lives of those you love—literally depends on it.