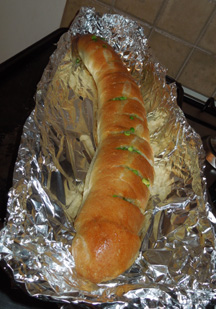 I don’t want to slam the big box stores. Okay, yes, I do. But I don’t want to single out Costco, which historically has had a minute concern for the welfare of its employees (I stopped shopping at Sam’s Club more than a decade ago because I couldn’t stomach the way Wal*Mart treated its workers).

Here’s what’s wrong with Costco (and all big box stores). Call it a Primer:

Unless you are running a food kitchen or a commissary (in which case, if you are, BLESS YOU), there is no reason to shop at a big box store. Ever!

Want anecdotal proof? Okay. I just got back from DC. I’m totally exhausted. I need an easy fix for dinner that is both filling and uses up some portion of my CSA share. I’m thinking, and I come up with garlic bread! Yummy. Simple. I have butter, I have scapes… local Italian bakery has a baguette with my name on it. My recipe is simple:

And here is where we return to Costco. I don’t like a messy, smelly oven. I recommend wrapping your bread in aluminum foil before putting on a cookie sheet to bake for 10 minutes. The butter will melt and if you don’t wrap it in foil, you’ll have a burned butter smell in your kitchen and a mess to wash up after (did I mention I was going for “simple”?).

So, I wrapped my bread in foil and I noted the telltale Kirkland brand on the box. I have at least half of this 1000 sq. ft. box of foil left to consume. I purchased this foil in 2007 if not earlier! What on earth was I thinking? I had bought into the suburban myth (let’s not talk about the loss I took on my suburban house when I sold it). The idea that a big ole box of foil at a discount was a better “deal” than buying foil as I needed it.

I remember throwing out peaches and grapes and, yes, even industrial corporate “organic” lettuce mix, thinking that I had somehow or another saved in the long run. Truth is, I probably dropped $10 on that box of foil. Did I miss the money? Of course not. But what is the greater cost of a 5-year-half-life on a box of tin foil? This isn’t Plutonium. This is food covering. And every time we buy more than we need, we are degrading the earth and ourselves in the process. The proof is in the longevity.