Fiction / The World In Six / Travel 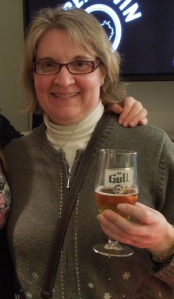 Let’s toast in the New Year. And plan to be more than we were!

I recently came across an amazingly well written blog (note: Chuck curses like a sailor, which I find really amusing but some may not) that admonished writers not to do 25 acts of self-sabotage. Out of those 25, I was guilty of roughly, well, 22. Among the more blatant sabotaging efforts in which I engage are stopping mid-project and allowing less interesting work to get in the way of my grander plans. Being a dreamer instead of a doer. Chuck mentions fear and self-loathing as being two prongs of a pitchfork upon which writers who don’t write impale themselves (my metaphor, not his; among the 25 of which I’m not guilty is writing in my own voice… I’ve got that down… parenthetical phrasing and all!).

I had to think about that for a bit. I certainly have issues of esteem that are no longer manifested in my daily life. Unfortunately, however, they have permeated by very being. Instead of feeling unworthy of love, for example, I just take it as gospel that I will never find love so I’d better stop dwelling on looking for it. When I’m offered pennies per word, I take it as the proof to my complex equation of the age old quandary, “How much am I worth?” Instead of writing my tome and allowing it to be scrutinized, I write half of it, become bored or preoccupied (or, simply, occupied… convincing myself that pennies are better than nothing), because I’ve already decided that since no one has ever understood me no one ever will (and “no one” is a bit broad… I have met two or three people in the course of nearly five decades who “got” me, but that number is still remarkably low considering my willingness to “overshare”).

Which brings me to the absence of these past four months. I’ve been busy. I’ve been employed. I’ve even paid down some debt and made a wee bit of headway on my financial situation. But I’m still treading water. I’m far from swimming, let alone having the strength or fortitude to swim upstream. I want to believe that 2012 will be a watershed year for me, but it’s oh-so-easy to set those resolutions in January only to wonder where they went come December.

Goal setting has never been my strong suit. I would have made a great caveperson (regardless of whether or not such creatures actually existed): I am well designed to act in the moment on a physical level; I have that fight or flight thing down. However, as a sentient being, I generally flee from the moment in my head rather than fight for what I need or want. It’s from years of capitulation that I’ve found it to be far less exhausting to give up rather than to fight and lose. It’s no longer about being afraid to fail; it’s a general resignation that failure is a foregone conclusion.

I don’t write this in sadness but more as a baring of my soul, so to speak. I have actually been clearing my plate of crumbs in the hopes that I can create an entree worth eating; I’ve pretty much stopped writing e-books, for example, because the pay was abysmal. I’m tending bar (having come full circle back to my 20s… without the benefits of youth), which I generally despise (not because I hate the bar or the people, but because it’s so not where I want to be). However, in some ways, this is a more motivating situation: if I truly hate what I’m doing, I’m much more likely to propel myself in a different direction. I could literally be ghost writing e-books until the end of my days, with literally nothing to show for my efforts (i.e. the pay is incredibly low and I cannot claim ownership of the writing, no matter its quality).

So, I will try try again to resume blogging and writing meaningful prose. I’m hoping to get with some meetup groups in the region, simply to have someone to hold me accountable. I need that “you have a deadline” pressure from an external source. I wish I were wired differently, but realizing I’m never going to accomplish my goals without a serious stick whipping me in the direction of the carrot is not a failure. It’s accepting that if I stop to nibble at every leaf of cabbage along the way, I’ll never accomplish anything of merit with regards to my writing.

2 thoughts on “Where Did The Time Go?”