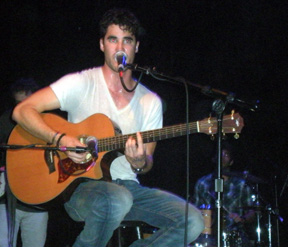 So, last night I went to a general admission concert featuring Darren Criss. More on that tomorrow, perhaps, but this was the first time I’ve ever been to a GA concert of this magnitude. It’s also the first time I’ve been to a GA concert and was within 10 feet of the stage (i.e. 3-4 people back). I was there with my daughter and I understood the rules: Don’t drink anything (the requisite need to relieve yourself will mean you are never getting back to your spot), wear comfortable shoes (I did, but my feet still hurt after close to six hours of standing), and don’t get into altercations with the people standing way too close to you (my daughter had a “foul-smelling-liquid” incident about a year ago when a burly bastard poured, well, a foul-smelling liquid on her; one of her good friends ended up with a broken nose in a mosh pit jostle).

What I couldn’t understand until it happened was the “shove,” a massive piling on of people that effectively sardines you either into moving forward or into being pushed back. My feet were already sore, so I wasn’t about to relinquish my territory. That said, I really didn’t want foul-smelling liquid poured upon me (unlikely, as I think I was the only person over 40 within 25 feet of Mr. Criss; his—oh, how shall I put it?–passionate supporters weren’t old enough to drink anything too foul). The risks of ending up with a broken nose, however, were significantly higher. Particularly as a person I shall call AMAZON WOMAN (henceforth to be known as AW, as in AWful, among other NSFV colorful descriptions), decided that her 69″ of blonde bombshell really needed to elbow its way to the front of the stage from 10 rows back (dare I note the irony that Mr. Criss does not appear to be even close to that Amazonian height; perhaps she planned to club and drag him back to Brasil… ah, but I digress).

A brief note about genetics: There is little you can do about it. I am—oh, how shall I put it?—substantial. My lovely daughter is not. For those of you who remember Shrinky Dinks, I joke that my daughter is a shrinky-dinked version of me. Quite lovely, shapely and tiny. For those too old to remember Shrinky Dinks, you may recall the South Pacific tune, “Honeybun” (101 pounds of fun… only 60 inches high). That is my kid they’re singing about.

Anyhow, whether it was my nature as a New Yorker to protect myself or my instincts as a mom, when AW’s elbows went flying towards my kid’s head, I went into hyper-protective mode. I managed to wrap my arm around my daughter, wedging it between my child and AW (my daughter would later mention that she was really being injured by the woman and then the contact seemed to abate and then she realized it was my arm that was shielding her and then she heard my voice).

I was rather proud that I didn’t curse, but I was not gonna take anything else from AW. Speaking of genetics, I got the scary person gene from my dad. Maybe it’s a slight insanity, maybe it’s raw intelligence, maybe it’s just the frustration of a diehard romantic who is worn down by life’s injustices. Who knows? But I’m scary in a confrontation. I’m not crazy scary; I’m Sean-Penn-At-His-Darkest scary. I “explained” to AW that she had inched her last inch, and to “BACK OFF NOW!” from my daughter. She feigned ignorance, but by the third song in Darren’s set, she had moved (in the opposite direction from the supermegafoxyawesomehot celeb, I might add) a good yard or so away from me and my child.

Which brings me to celebrity fanaticism. I have met quite a few truly famous people (I won’t name drop, but there have been Emmy winners, Oscar winners, Golden Globe winners, Tony winners, and so forth). I have also come across the odd random celeb here in NYC because it’s one of the few places on the planet where celebs can live a more or less normal life (we New Yorkers tend to avoid eye contact and have earbuds in our ears at all times, leaving celebs and pretty much everyone else alone!). And when I say met, I mean “met.” Not stalked or tried to get close to; actually met and had conversations with these people. My daughter is, in fact, on her way down that path (although she is only a working actor now and may forever be so, given the quirks of the entertainment business). Thus, until she turns 18 and can be alone on set, I will continue to be thrown in the path of famous people.

However—and this is key—HOWEVER, my having met them does not mean that they have met me. I know famous people. They do not know me. They know my daughter, and the few times I’ve bumped into them on the street I introduce myself as my kid’s mom and they are instantly nice to me and inquire after her. I never touch them, even to shake a hand (unless it is offered to me first); I do not ask for an autograph or take a photograph. Most importantly, I do not have random and ridiculous flights of fancy and think that if only I would elbow my way to the front of the line so that I’m right in front of them my life will be drastically and markedly improved. I know that no matter how many celebrities I meet in my lifetime, until one of them actually meets me (maybe I’ll write a great screenplay one day!), it means absolutely positively nothing.

So for those who have idealized notions about brushes with fame, I say this: Your fantasy will produce nothing good (John Hinkley, anyone? Mark David Chapman, perhaps?), and—even if we go with that fantasy and say it is possible—the object of your affection is just another person who eats and poops and has his/her own ideas about what qualities a good partner should have. Being on stage should not result in injury to audience member or talent (Mr. Criss was yanked off the stage earlier this week by an overzealous Glee fan). If fans could remember that the guy they covet is human, perhaps they will remember that they, too, are human, and they’ll stop behaving like animals in public.